We previously helped to promote a vision for a UK Coastal Prayer Chain, by Chelmsford Christian, Jen Gaskin, to take place on Saturday 21st September 2019 – click here for what we said.

Well, it has happened, and here is Jen’s write up from the day.

If you took part, do add your experience and thoughts to this article in the Leave a Reply box at the bottom of this page.

Saturday 21st finally arrived and was the most beautiful sunny warm day. Perfect for a UK Prayer Chain.
.
I cannot give any guess as to how many joined in, we put red dots on a map when people informed us where they would be standing and the South Coast was particularly well covered. Orkney Island was another good area and even the Shetland Isle had red dot or 2!  We have had some good feed back which has been so encouraging and exciting. I will now include a few of  these.
.
‘Folk from Shoeburyness, Essex, opened their Church and served free tea and coffee afterwards.’
‘We took flags and sang These are the Days of Elijah, blew shofars, read a prayer and had open prayer. It was a really good Holy Spirit moment.’
‘Well done for hearing God. It was certainly a care moment.’
‘We have started your Prayer chain tonight in Parliament. I felt it was significant that we were praying from Parliament Square. That life was being prayed throughout the body of the UK as a nation.’;
.
These are just a snippet. The full text from Parliament was very encouraging.
.
As we started to say the Lord`s Prayer at midday it felt very emotional, tearful even.  I, and others have said they felt the same.
.
We had reached the moment that God had led us to and were obediently and reverentially speaking out the Lord`s Prayer across the land and its people. What an awesome moment it was.
.
As I contacted different ministries I was left amazed at how many prayer meetings and conferences were happening on the 21st September, BUT many agreed to stop at midday and join with us in prayer even though they could not be on the coast.
.
I am acutely aware that without the help of many individuals, prayer groups, churches, Christian newspapers and radio stations, this mission could not have happened. God has, as always been faithful and doors have opened, often so exciting that I had to ring a friend and share what GOD had done on quite a few occasions.
.
I am so thankful to God for leading me, for being there every step of the way  and sincerely grateful to every person who has stood with me and believed that this was Gods will.
.
I was also sent a video which was an explanation of the Jewish year and its meaning.
.
‘Because of the partial eclipse in January it meant that there would be a birthing 9 months later which would take place on the 20/21 September’!
.
Jen
.

Come pray for Chelmsford. Next is Thursday 23rd January 2020 – all welcome – click below for details 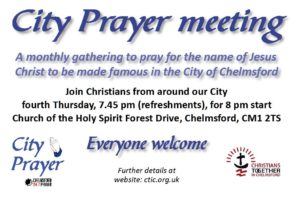